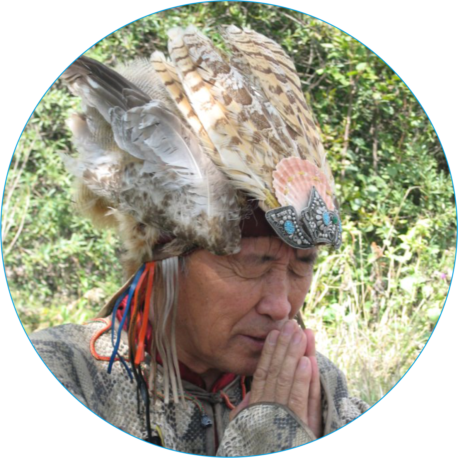 Nikolay Oorzhak was born in december 1949, in a small village in West Tuva, called Khorum-Dag. After ginishing hig-school in 1964, he worked 4 years as sheperd for horses, sheep and cattles. In stepa, alone with his herds, he began to make sounds similar with his father and grandfather. What he was doing was called Khoomei, meaning throat singing.

„Throat singing is imitating animals voices and sounds that are created in harmony with sounds of the Universe. For me, all these sounds are representing the rytms of the Oneness”, sayd Nikolay

In 1989, in Kyzyl, the capital of Tuva, he received the First prize for the singing style Kargyraa at the first festival for throat singing. At that time he was already performing in all harmonic styles (xorekteer: khoomei, kargyraa, sygyt, borbangnadyr, ezengileer) and he became Khoomeji (recognized Master of Khoomei) in his country. In the same year, together with another singer Boris Kherly and the science man, Zoya Kyrgys, they founded the Tuva Ansemble. They had many international concerts included in Norway, Sweden, Turkey and Mongolia.