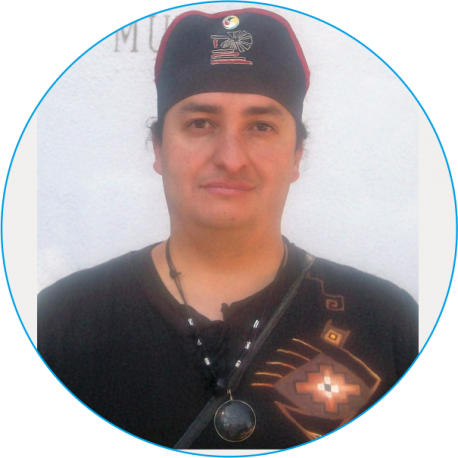 Tetzkatekuhtli Kuauhtlinxan, translated The Senior of the mirrors, of the eagle’s nest, belongs to one of the 22 Kaxtias (dinastic families) of mexican tradition that are given the role to keep the knowledge of Tetzkatlipoka tradition after Spanish came in Mexic. This tradition is one of the 4 big knowledge schools that developed, collaborated and had a big influence in nations’ evolution from high planes of Mexic.

Tetzkatehutli has knowledge of medicine, cosmovision, war and ceremonial dance. He is also responsible of training the new generations that live in the philosophy of Tetzkatlipoka tradition. Main objective of this tradition is to support the human beings development to act in a conscious and responsabile way for reaching the “Supreme Balance in Harmony”.

From 1998, he is delivering therapies in different places in his country and in the world and  from 2008 he organizes workshops and conferences about Mexican culture and traditional medicine in private companies, national and international educational institutions. From 2015 he is member of the internal council of the council of the Circle of Wisdom of the Union of Ancestral Traditions from Paris. He teaches courses, workshops, conferences in Berna, Berlin, Barcelona and Bordeaux about cosmovision and mexican traditional medicine and aztec calendar. He organizes individual and colective healing ceremonies.